In just one month since the new Hepburn Solar Bulk-Buy was launched, already 28 households have ordered a solar PV system, with 5 of these also investing in a Tesla Powerwall 2 home battery.

We’ve got a target of 200 new solar rooftops between now and the end of December, said Jo Kaptein, Program Lead for the Hepburn Solar Bulk-Buy. So already we’re at 14% of target which is terrific.

The total number of kilowatts ordered so far is 175 kilowatts and our target is 800 kilowatts. Already, the systems ordered will cut CO2 emissions by around 248 tonnes per year which is equal to 50 less cars on our roads per year, said Jo.

This is a great start and we’re confident that, with the widespread community support for this project, we’ll smash the target, said Jo.” 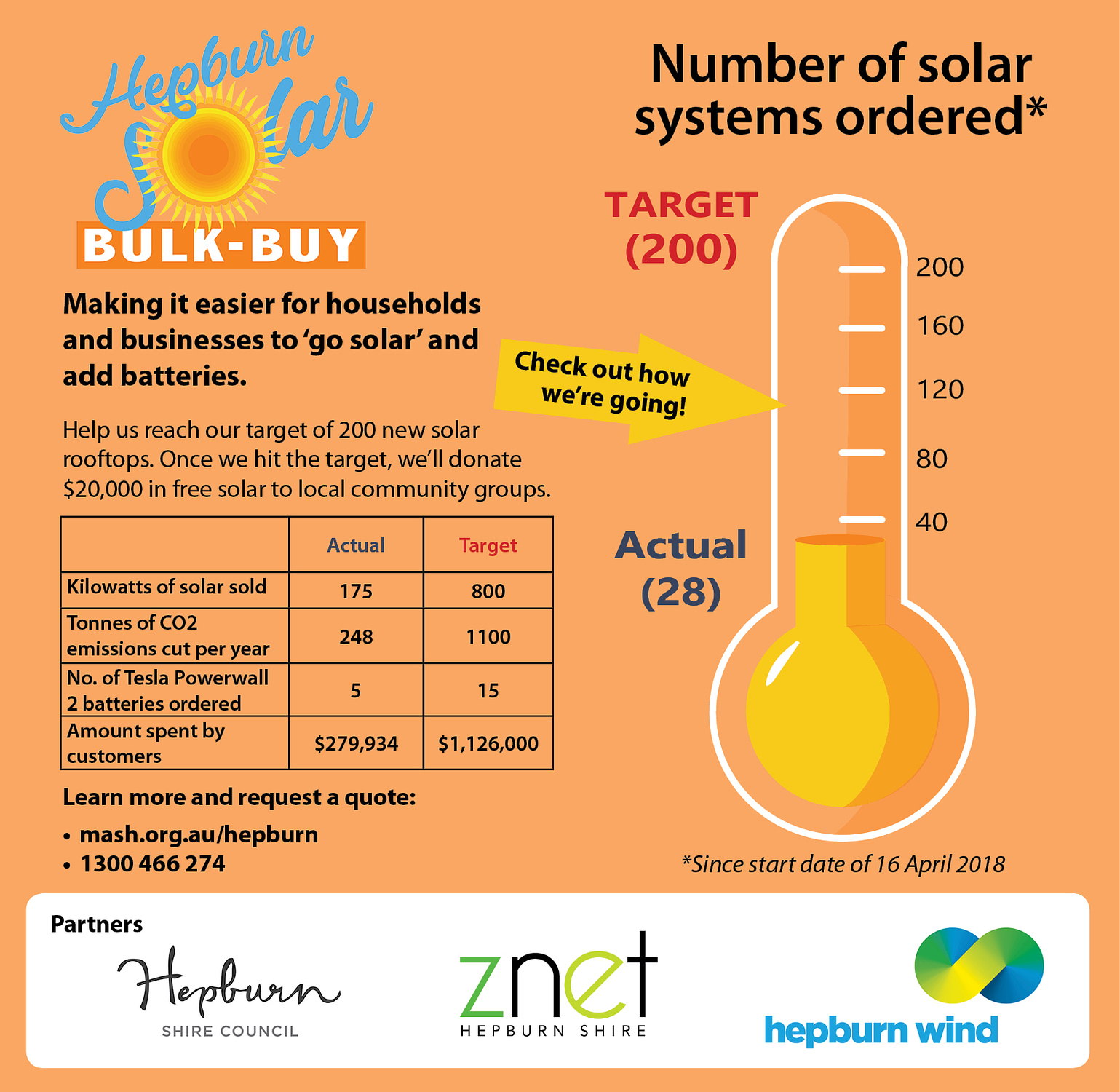 Close to 300 people attended the first wave of info meetings about the Hepburn Solar Bulk-Buy and Z-NET Hepburn Shire which were held in the second half of April 2018. It was interesting to see how many community members were keen to find out not just about solar PV but also battery storage. As a result of these meetings, by the third week of May already 30 householders in the Shire have ordered a solar PV system, with 5 of these households also investing in a Tesla Powerwall 2 home battery system.  And these numbers are expected to keep on rising.

We’re finding that residents really appreciate the opportunity to find out about the bulk-buy directly from the people who run the project, said Jo Kaptein, Program Lead for the Hepburn Solar Bulk-Buy who works at Castlemaine-based not-for-profit, Central Victorian Greenhouse Alliance.  Having the chance to put forward questions at the end of the presentation is really popular – that’s why we allow a good 30-40 minutes for that part of the presentation.”

Further info meetings will be held in Hepburn Shire starting on the 14th of June. To find out more and register for one of these events, visit https://znet.eventbrite.com or call 1300 466 274.

The MASH Community Solar Bulk-Buy project is looking for more solar installers to get involved.  Clean Energy Council accredited solar installers based in the region where the community solar bulk-buy is available – i.e. the shires of Mt Alexander, Macedon Ranges Shires and Hepburn as well as the City of Greater Bendigo – are invited to apply directly to the MASH solar supplier, Energy Matters via email at installations@energymatters.com.au.

We’re really keen to promote local jobs for local solar installers”, said Jo Kaptein, who manages the MASH project which has recently moved over from the Hub Foundation to another Castlemaine-based not-for-profit, Central Victorian Greenhouse Alliance.

We have appointed a solar supplier for our bulk-buys through competitive public tender; we are pleased to confirm that we are working once again with Energy Matters”, said Jo. “We’ve worked very successfully with them in the past and their focus on quality and customer service is terrific.

Already a number of local installers are carrying out solar installations for the MASH and Hepburn Solar Bulk-Buys under contract to Energy Matters – and the great news is that due to high demand, we need more!  Energy Matters can of course bring in more installers from outside our region but we’d prefer for local installers to do the work, as this keeps more of the value created by the project within our region.”

Energy Matters is a CEC Accredited Solar Retailer selected as the solar supplier for the current round of MASH (round 4) and the Hepburn Solar Bulk-Buy projects, both of which launched on 16 April 2018 and will run through to the end of December 2018.

Energy Matters appoints local solar installers, where possible, to install high quality solar PV and grid-connected home battery systems, thereby supporting local businesses in the region where the MASH and Hepburn Solar Bulk-Buys are available.  These installers work under contract with Energy Matters to their performance quality standards. The quality of each installer’s workmanship is underwritten by Energy Matters.

Castlemaine-based solar installer, Morgan Kurrajong owner of Universal Power and Light says, “MASH has supported my business over several years to provide local employment. I live in the area and employ local guys. So it’s been a great boost.”

Should any CEC accredited solar installer with an outstanding quality track record in the Mount Alexander Shire, Macedon Ranges, Hepburn Shire or City of Greater Bendigo be interested in working under contract to Energy Matters on the MASH or Hepburn Solar Bulk-Buy projects, please get in touch with Energy Matters at: installations@energymatters.com.au

To learn more about the MASH and Hepburn Community Solar Bulk-Buys and to register for a quote, visit mash.org.au or call 1300 466 274.

Castlemaine’s not-for-profit Hub Foundation has owned and managed the MASH community solar bulk-buy project since it started in mid 2014, as well as the newly launched Hepburn Solar Bulk-Buy.  To date, over 850 solar systems have been successfully installed by MASH suppliers in central Victoria. As a result, MASH has been instrumental in raising the solar penetration in Mount Alexander Shire from 18% four years ago to 28% today as well as made a significant impact on the Macedon Ranges Shire and City of Greater Bendigo.  The result has been a huge fall in CO2 emissions by around 5,000 tonnes per year.

The project has been directed over the four years by Neil and Heather Barrett, and Mark Carter, with day to day management by Executive Officer, Jo Kaptein,  In recent times, as many will know, Neil and Heather have become very involved in The Paddock eco village development on the edge of Castlemaine, to the point where they have decided it’s time to pass MASH over to another not-for-profit, the Central Victorian Greenhouse Alliance (CVGA) which is also based in Castlemaine. The Hub Foundation are very confident that the CVGA has the capability to further enhance the penetration of MASH solar systems into residential areas throughout central Victoria and beyond.

The CVGA is a network of 12 local governments in central and northern Victoria, founded in 2001. The CVGA have a long history delivering community energy projects such as the Central Victorian Solar City project from 2010-2013 and more recently the Solar Savers program targeting low income pensioner households. The CVGA is managed by a board consisting of representatives of the councils, with day-to -day management by Executive Officer, Rob Law.  You can read more about CVGA at: cvga.org.au

Jo Kaptein, one of the driving forces behind MASH, will now work with CVGA in the same role she has fulfilled so successfully at the Foundation. She transfers to the CVGA with the directors’ very best wishes.

No change for past MASH customers

All MASH customers have signed contracts with the program’s various suppliers – not with MASH or The Hub Foundation – over the past four years. Customers with warranty issues should contact their supplier for advice in the first instance.  Alternatively, they can go direct to the manufacturer of the panels or inverter. Customers can rest assured that MASH, under CVGA control, will support past customers as effectively as it has under the Hub Foundation.

Finally, The Hub Foundation wish to give a big thanks to MASH’s 850 customers and to its suppliers, staff and contractors. The CVGA looks forward to continuing the success of the MASH program delivering wide ranging benefits to the communities of central Victoria.

For more information about both the MASH community solar bulk-buy and the Hepburn Solar Bulk-Buy (which is organised by the MASH team), visit mash.org.au or call the MASH team on 1300 466 274.